Nice and Not-so Nice Stuff Folks Have Said About The Prof.Fuzz 63 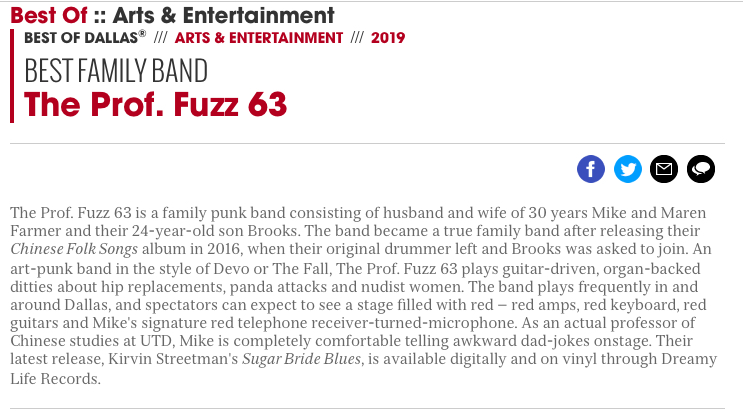 The Prof. Fuzz 63 is a family punk band consisting of husband and wife of 30 years Mike and Maren Farmer and their 24-year-old son Brooks. The band became a true family band after releasing their Chinese Folk Songs album in 2016, when their original drummer left and Brooks was asked to join. An art-punk band in the style of Devo or The Fall, The Prof. Fuzz 63 plays guitar-driven, organ-backed ditties about hip replacements, panda attacks and nudist women. The band plays frequently in and around Dallas, and spectators can expect to see a stage filled with red — red amps, red keyboard, red guitars and Mike’s signature red telephone receiver-turned-microphone. As an actual professor of Chinese studies at UTD, Mike is completely comfortable telling awkward dad-jokes onstage. Their latest release, Kirvin Streetman’s Sugar Bride Blues, is available digitally and on vinyl through Dreamy Life Records. — Dallas Observer. Best of Dallas (September 26, 2019) https://www.dallasobserver.com/best-of/2019/arts-and-entertainment/best-family-band-11764378 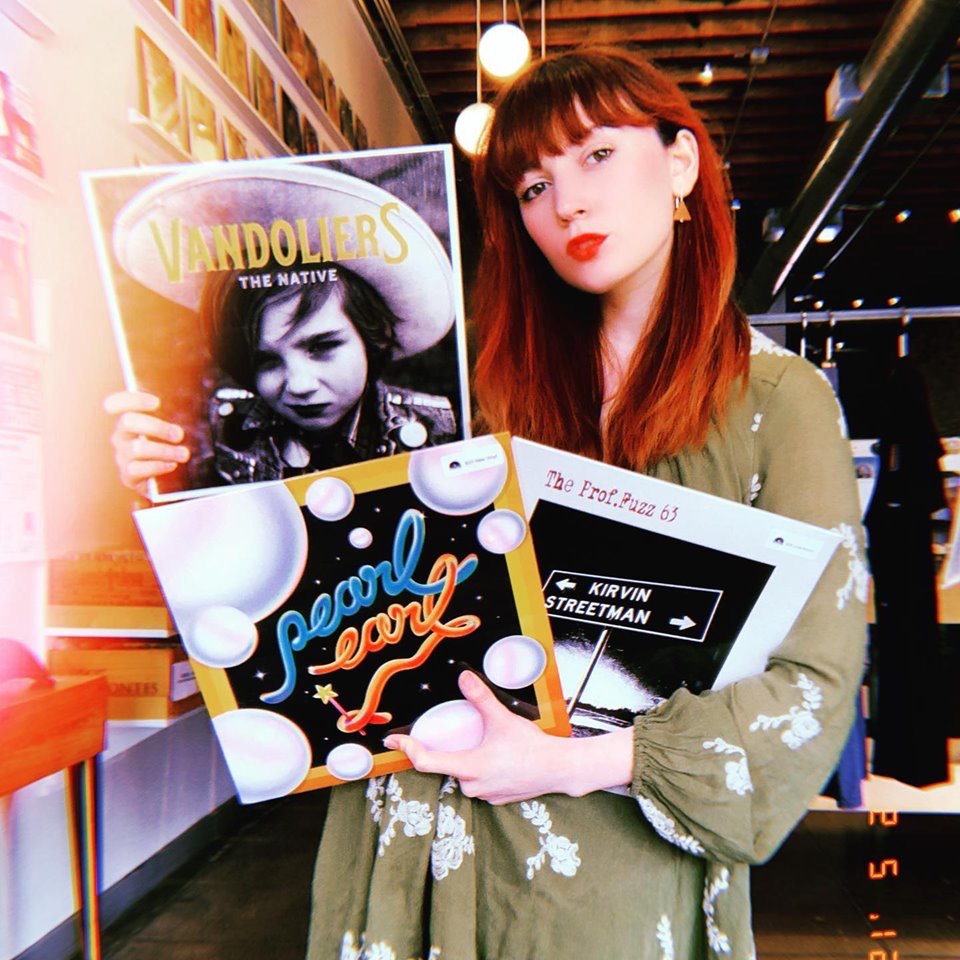 “The Prof. Fuzz 63 are a three piece family band making lo-fi garage rock. In my opinion they are the most underrated band in Dallas.” — Kate Siamro, Spinster Records, Dallas (June 2, 2019) 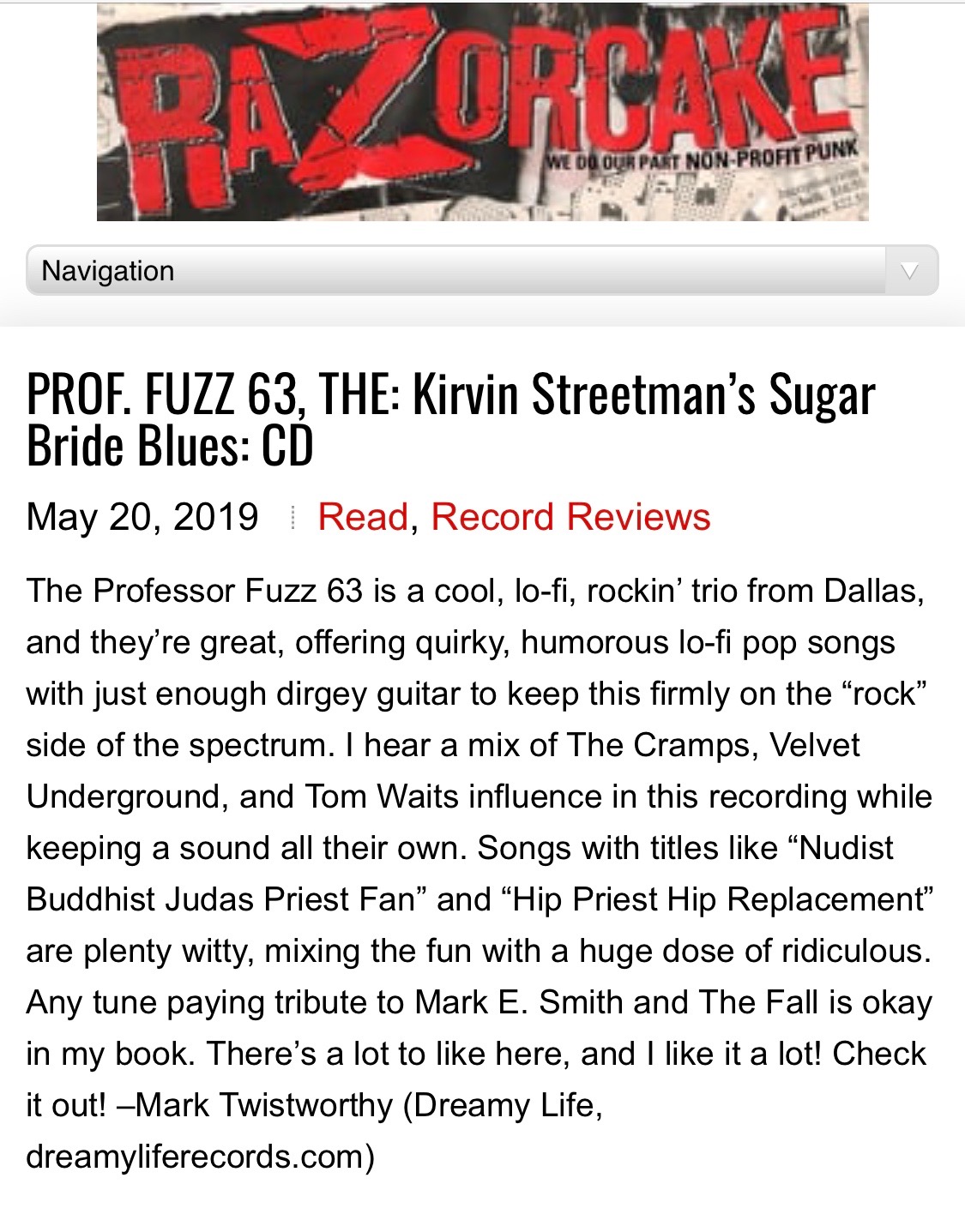 “The Professor Fuzz 63 is a cool, lo-fi, rocking’ trio from Dallas, and they’re great, offering quirky, humorous lo-fi pop songs with just enough dirgey guitar to keep this firmly on the “rock” side of the spectrum. I hear a mix of The Cramps, Velvet Underground, and Tom Waits influence in this recording while keeping a sound all their own. Songs with titles like “Nudist Buddhist Judas Priest Fan” and “Hip Priest’s Hip Replacement” are witty, mixing the fun with a huge dose of ridiculous. Any tune paying tribute to Mark E. Smith and The Fall is okay in my book. There’s a lot to like here, and I like it a lot! Check it out!” — Mark Twistworty, Razorcake (May 20, 2019)

“The Prof.Fuzz 63 is a British Invasion-influenced family band that sounds like what happens when Beat Happening makes records with The Cramps about nudist Buddhist Judas Priest fans, Arkansas brides, panda attacks, shitwater, and other fantastic song subjects.” — 979Represent (May 7, 2019)

“For casual listeners of the punk rock genre, The Prof. Fuzz 63 is probably not what you would expect a punk band to sound like. Sounding somewhere between bands like X and The B-52’s, with the vocal style of an upbeat Lou Reed, The Prof. Fuzz creates static-y, psychedelic dance-punk built around tongue-in-cheek lyrics that you won’t be able to resist singing along to.” — David Fletcher, Dallas Observer (January 31, 2019)

“You can’t know just how great The Prof.Fuzz 63 is without witnessing them live. I discovered their Bandcamp last year when I was searching for bands to play with in OKC – only to end up very surprised when I found out they were Dallas locals. We ended up recorded a song together for my Matchstick Singles. I had to – their music rocks. Catchy, ironic, hilarious Velvet Underground-meets-Ramones-meets-all-the-best-organ-centric-bands-from-the Doors-to-the Sir Douglas Quintet-and-the Horrors.” — Nathan Mongol Wells, Facebook (January 31, 2019)

SO…
IF YOU MISSED OUT…
I MADE MY WAY TO Notsuoh!!!
WHERE The Prof.Fuzz 63 AND Ian Quiet WRECKED SHOP!!!
PROF. FUZZ SOUNDS IS HELLA GOOD!!!
REMINDING ME OF A BUNCH OF SURFERS THAT WHERE CATCHING IT ALL DAY…
THEN DECIDED TO KICK OFF THEIR SANDALS AND JAM…
LAZY PSYCHEDELIC/SURF ROCK IS HOW I WOULD DESCRIBE IT…
BUT WAIT!!!
THIS FOOL IAN QUIET!!!
JUST MADE EVERYTHING BETTER…
HONESTLY…
THIS HIGH-HEELED KRUSTY THE CLOWN LOOKING GENIUS MADE THE WHOLE SHOW SOUND EVEN MORE COLORFUL…
(props on the wig)
PROF AND QUIET WERE A SEPARATE ACT…
BUT IT WAS OBVIOUS THAT THEY KILLED TOGETHER…
RARE SPECIES AND KILLER PANDAS!!!
GET FAMILIAR WITH BOTH THESE ACTS BY CLICKING ON THEIR FACEBOOK PAGE…
AND WATCH OUT FOR WHAT I SEENT…
CRAZY COOL… — Michael Mata, Facebook (March 10, 2018).

“I’d met Professor Fuzz, who’s a no-fooling history prof and Sinologist at UT Dallas, at a show a couple of years ago, and had dug his band’s quirkily idiosyncratic garage rock online, but this was my first chance to hear them in person.

The band — Fuzz on guitar and vox, his wife Sleepy Redhead on organ and vox, and their son Mr. B on drums (Fuzz quoted an ancient Chinese proverb to the effect that the best drummer is “one who doesn’t have other options”) — stays pretty busy, playing 50 shows last year all over Texas, Oklahoma, and Louisiana. The list of upcoming shows on their Facebook page already shows more gigs than Stoogeaphilia ever played in a good year, and it only runs through May.

They’re pure concept, with not an ounce of excess anywhere in their sound. Fuzz sings his amusing juvenalia about plumbing malfunctions, a local indie pop band playing Motorhead, double homicides, panda attacks, and the like, while coaxing gorgeously tweaked tones from his custom built axes. His wife is responsible for a huge chunk of their auditory impact, utilizing sounds that variously recalled Question Mark & the Mysterians’ Farfisa and the clavioline from the Tornados’ “Telstar.” Their son thumps the traps in the grand Mo Tucker manner — small price to pay, he said, for college tuition, room and board. Fair exchange.” — The Stash Dauber, https://stashdauber.blogspot.com/2018/02/2102018-fort-worth.html

“A garage punk family band with songs that ponder things like the potential omniscience and omnipresence of Nick Cave and Leonard Cohen’s “failed prophecy” of democracy coming to the USA. Goes great with a nice Pinot.” — dreamyliferecords, Instagram (July 19, 2017)

“Prof Fuzz 63: Psychedelic music is alive and well with these guys. There are some really cool sounds that come out of the speakers when these guys plug in.” — Joshua Reed, The Confounded Review (Feb 04, 2017)

“Prof Fuzz 63 open up the show and they play a special brand of garage pop. It’s got the organ parts of something like “? And the Mysterians”, the stripped back drumming style of a Jon Spencer Blues Explosion and the guitar playing reminded me a bit of John Hiatt for some reason but that may be because Mike was wearing a Tom Waits shirt and I always get Waits and Hiatt confused in my head. Mike’s a guitar head like me and he’s got really unique guitars with just a neck pickup goldfoil and a couple of fuzz pedals and his tone was always spot on for what they were doing. And what were they doing? They had songs about Pandas, Van Stoner’s Stoner Van, some Weekly World News topics and just strange but smart songwriting. Before we start we’re all mingling around telling stories and meeting some new folks. Ronnie introduces me to Phillip and I say hi. He looks familiar but I can’t place him. He really dug Prof Fuzz 63. Turns out he’s the drummer from the Old 97’s. Well I’ll be dammed.” — Bobbo Byrnes, CCWM (Nov 17, 2016)

“True hoodoo garage rock from Fort Worth. Kinda Beat Happening, kinda The Cramps, kinda awesome earworm songs you’ll be singing along with by the second chorus.” — BCS Loud!Fest! (May 07, 2016)

“The songs go exactly where you think they will go. You are not hearing anything new if you have even a passing familiarity with the history of rock & roll in the 1960s. But it does not lessen the experience one bit. The songs are clever, they will make you laugh, and most importantly, they make you want to hear them again and again. I can listen to “The King of Hong Kong” once and be singing it to myself for days afterwards. Chinese Folk Songs is just good, subversive fun.— KELLY MINNIS” — Kelly Minnis, 979 Represent (Mar 04, 2016)

“There are certain labels that have a good enough reputation that when they release music, it’s worth noting. Idol Records fits that category, as does Hand Drawn Records. But I’d also have to add Dreamy Life Records to that list. Their latest release is from Prof.Fuzz 63, a group that has had some rather interesting comparisons. Fans have described them as everything from the “love child of Tom Waits and the Supersuckers” to “1991 Mudhoney with fuzzed out guitars and British Invasion organ.” My favorite comparison? The person who said they sound “like the Velvet Underground, but not as cool as Lou Reed because, who is?” Can’t argue with that logic. Speaking of cool, you’ve gotta love an act that would name a song “Minnie Pearl Watch Over Me”.” — The Ghost of Blind Lemon, The Ghost of Blind Lemon (Jan 19, 2016)

“The Prof. Fuzz 63 — its very name evokes the likes of Strawberry Alarm Clock or Chocolate Watchband — describes its sound as “lo-fi, fuzzed-out, garage folk.” (The band also cites Sparklehorse, Tom Waits and the Velvet Underground as inspirations.) Given such a colorful set-up, it comes as no surprise that Fort Worth’s premiere purveyor of the trippy, Dreamy Life Records, is responsible for the release of the Dallas trio’s debut album, Chinese Folk Song. Guitarist/vocalist Professor Fuzz, organist Sleepy Redhead and drummer Julie G worked with producer Britt Robisheaux at Fort Worth’s Cloudland Studio to craft these eight tracks, many of which sport some of the best titles I’ve seen in years: Minnie Pearl Watch Over Me; Trans-Allegheny Lunatic Asylum.” — Preston Jones, Ft Worth Star-Telegram (Jan 13, 2016)

“This week’s Soundcheck features a couple of bands on Dreamy Life Records releasing albums tomorrow! The folks at 1912 Club let us shoot two bands and turned on the groovy, psychedelic lights. Both Dallas-based bands, Professor Fuzz 63 and Mercury Rocket, played a tune for us and sat down for an awkward, half-drunken interview with the palest fellow on Youtube. Check out the video, and then go see both acts tomorrow night at 1912 Club (1912 Hemphill St.). Fort Worthians The Fibs and Dallas’ Kallohonka are also on the bill.” — Eric Griffey, Fort Worth Weekly (Jan 01, 2016)

“Chinese Folk Songs by another Dallas trio, Professor Fuzz 63, is a little quieter, a little groovier, and a little more Velvet Underground-inspired than their fellow Dallas label mates [Mercury Rocket] but no less fascinated by ’60s psychedelia.” — Hearsay, Fort Worth Weekly (Dec 30, 2015)

“The Prof.Fuzz 63 are like the sons and daughters of the Velvets: Jonathan Richman, Steve Wynn/Dream Syndicate, The Cramps.” — Kelly M., The Ex-Op Review

“The sum of the Nuggets and Pebbles compilations…” — Wonko Zuckerberg, The Zuckerberg Review (Nov 19, 2015)